It’s easy to see why you can leave your heart in San Francisco – both literally and figuratively. It’s quite breathtakingly beautiful, and everywhere you walk is at least a 30 degree incline. A few more days of this and a person could call themselves fit..ish.

San Francisco is only 7 miles wide and 7 miles long, built on 40 odd hills and surrounded by water on three sides. Only 850,000 people live here and probably another 300,000 illegals. San Fran has always been a sanctuary city for draft dodgers and hippies in the 60’s, gay rights activists of the 70’s and eighties, to illegals now. The city of peace and love is still here.

The great redwoods forest is only a 25 minute drive from the city. Tallest living thing on the planet. Fortunately for us , the bus broke down on the way back from the forest and we had a few hours free time in Sausalito. Think Sorrento…pretty town. We sat down on the dock of the bay and watched the ships roll in, then we watched them roll away again…just wasting time. Yep, that is the exact spot Otis Redding wrote the best song ever written – “Sittin’ on the dock of the bay” (well, it’s in my top ten anyway). The spot captures the cruisey vibe of the song perfectly.

I’ve got to have a little whine about the weather. It’s been a little brisk for my taste, and windy. It has something to do with that pesky little thing, you know, science. It’s right at the mouth of the Golden Gate where cold ocean waters and warm inland air make San Francisco one of the coldest summer cities in the whole USA. As Mark Twain once said – “The coldest winter I ever spent was summer in San Francisco”

The city is dense, no one has a garden, so space is a premium. Rents are very expensive and so homelessness is rife. But then again, so is Melbourne.

My favourite place was Haight Ashbury home to the hippies of yesteryear and they are still there today, bless them. Wandering the streets with their love beads and “jesus saves” sandles. The shops do a nice little trade in brand new 100% polyester shirts and pants. Fabulous bookstores and the most marvellous music store I have ever seen. Over 100,000 albums, CD’s and books – new and second hand. Felt that over excited, like I had one foot nailed to the floor and was just spinning. Cheap too.

Heaps of homages to the past, the house where Jimi Hendrix lived has the lyrics of Angel on the front door. A little plaque outside one of the 25 houses Janis Joplin lived; she was, by all accounts, a reckless housemate. Lots of great stories about her love affair with Southern Comfort and the chaos she would cause after a big night. But what a voice. Also around the corner lived a couple of the guys from the Grateful Dead. I was born way too early. What a time that must have been here then. Making music that changed the world. Buskers are everywhere and damned talented, who knows who will be the next Janis or Dylan?

We hired this fabulous little combi van (see pic) to drive around town. Sure, we had to double clutch the gears and the handbrake was dodgy but the little bus could go anywhere. Even went through Lombard street. Most crooked winding street you have ever seen.

California, like many other states, have legalized marijuana. The weed shops are springing up like milk bars on corners. Selling bongs, shishas and more brands of weed than an IGA aisle of yoghurt. Can’t find what you are looking for? Well just let the friendly weedster help you out. The weedster is like a barista, you know, but weed not coffee. And he or she will tailor your dope to meet your own specific needs. Great piles of the stuff sitting in the dispensary. A little of the organic from Monterrey for the mellow….add a pinch of Mexican blue (if you like the dreams) and a dash of Oregon Gold and all your troubles will disappear like mist in the moonlight. Probably polishes and re-adjusts your chakras too. Maybe there is a Tafe course somewhere because, you know man, this is, you know, like, a very skilled art.  At the moment you need a Doctors note to buy it, but come January it will be easy access for all. You can, however, buy TCH pills where you can get the mellow but no high… a bit like a vitamin E tablet. Ask your friendly Tafe diplomaed dispenser what you need. Something to make you relax, sleep and something for pain. Bingo! $54 later you have enough pills for 3 months. This, however, would be illegal and stupid to take them into some places, like Cuba for instance. Point noted.

But that cool music store we went to has all this legal nonsense sorted. At various times of the day, an A-frame goes out to say the Doctor is in store. Sit down and have a friendly chat to the Doctor (aka “Timothy Leary”) and 5 minutes later you have signed paperwork to say you may purchase marijuana from any store in California. Ah American capitalism, just too fabulous for words.

I’ve included a couple of photos of our trip thus far, but I am no good at it. This is the best of a bad bunch. Pictures are of Jimi Hendrix lyrics on a door, the music store of all music stores, a slice of a giant redwood (the centre is the birth of the tree from 909AD, the tree died in 1930 – simply amazing and puts life into perspective), an honest man on the street, and Ray standing proud next to our combi van.

So it’s been 5 days of fun. Food has been great, everyday a new adventure. Off to Denver tomorrow.  Going to have a few weeks driving Wyoming and Colorado. 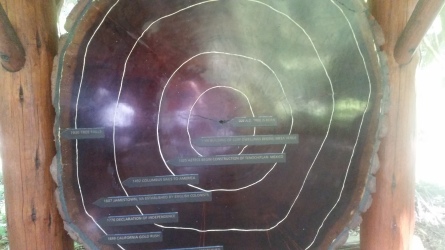 3 thoughts on “Hippy love, Redwood magic, and smoken’ the dope”